Is now a good time to be optimistic? 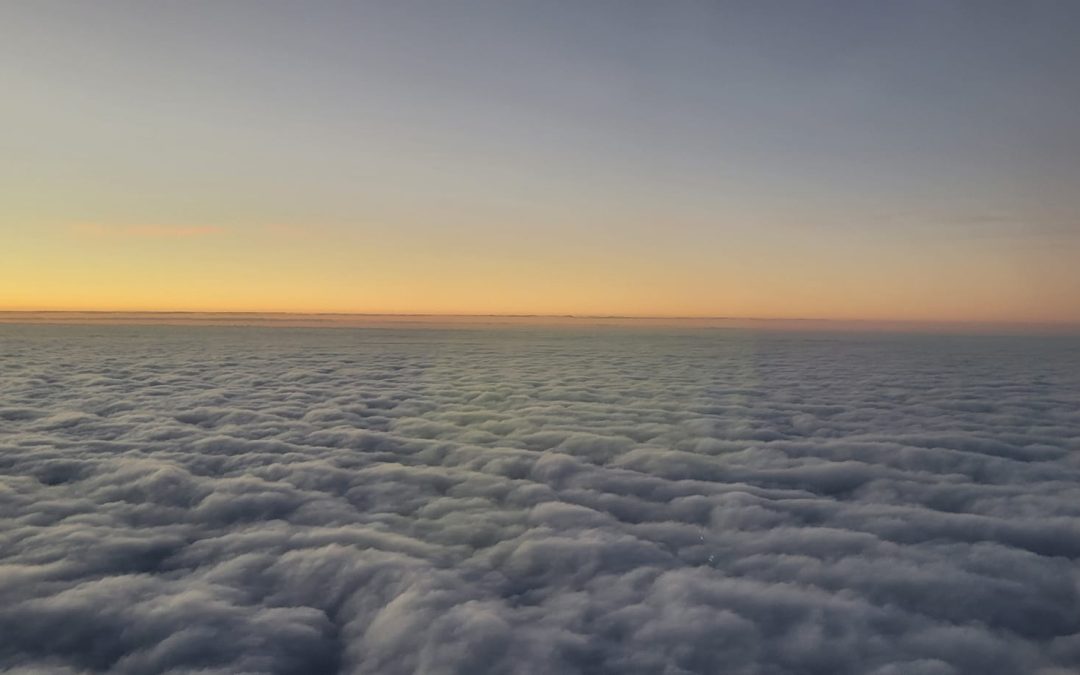 Is now a good time to be optimistic? Amidst economic malaise, political turmoil, and public health disasters, Americans on average have become more pessimistic about the future. Recent Gallup polls, for example, show that U.S. adults have in recent weeks become more pessimistic about the coronavirus situation. Similarly, Gallup’s investor optimism poll still lags below pre-pandemic levels. This is not a new phenomenon, either, as pre-pandemic polls show majorities saying that they think the world is getting worse. On the flip side, certain groups seem to be more optimistic than others, as younger generations, blacks, and Hispanics express greater optimism compared to middle-aged and older whites. Behavioral studies point to availability and other cognitive biases that can push people toward being more pessimistic, and the built-in bias toward bad news in major media adds further to the pessimism side.

Rising pessimism could spell trouble because researchers across a range of fields view optimism as an important factor in human progress. Psychologists define optimism as the degree of confidence and hope a person has in the future being good and positive. Enormous piles of studies have been written on optimism, across many fields and areas of literature going back decades in time. Optimism is a core concept in behavioral science. As one lengthy survey of the research summarizes, “Optimism indeed appears to be associated with higher levels of subjective well-being, better health, and more success.”

Common survey-based measures of optimism include the Life Orientation Test-Revised (LOT-R) and the Attributional Style Questionnaire. Researchers have shown optimism to be associated with better health and life outcomes. Greater optimism is associated with having larger social networks, living longer, coping better, and continuing to fight through adversity towards goals. College students with optimism have significantly higher levels of well-being, mentally, physically, and adjustment wise. Economics research shows that optimism correlates with greater success, a better outlook on the macroeconomy as a whole, and greater expectation of future income growth and years of remaining work. Optimists tend to thrive with competition and are more likely to start businesses. Optimists also tend to do better in situations of illness, pain management, depression, and trauma recovery.

On these points there seems to be broad agreement, although the causes of optimism and these correlations raise more complicated questions. What is the nature of optimism, is it a character trait or a situational tool, is it a discrete character type or continuous choice variable? Some argue that optimism derives from preparedness, self-care, and other agency-related factors. Some evidence suggests that for some people optimism is conditional, in that it depends on a person’s stage in life, current situation, and experience. Other areas of the literature look at optimism bias and the dangers of over-optimism such as high-risk behavior (gambling, substance use), poor financial situations, shorter planning horizons, perfectionism, and other adverse outcomes.

In summary, research tells us that optimism coincides with so many measures of human betterment. Yet meanwhile, today’s polling and climate of ideas are becoming more pessimistic. That could spell trouble if rising pessimism breeds worsening conditions.

From a historical and data perspective, it can be puzzling why pessimism is on the rise because so many trends are getting better. Cross-country indexes provide one source of evidence for optimism. For example, since 2011 the Social Progress Index has tracked 53 social and environmental measures across 168 countries, showing that conditions have gotten better in the last decade for the vast majority of the world. Similarly, in the annual Economic Freedom of the World index, we find that around the globe people’s rights to their own livelihoods have been increasing on average since 2000. Sadly, due to the opioid crisis and other chronic sources of preventable deaths, the United States is one of just four countries to get a worse score on this year’s Social Progress Index. Meanwhile, the annual Rule of Law Index shows a worrisome trend, namely the decline in the rule of law worldwide, with many countries restricting personal rights and struggling with sustainability. Even so, the rise of social progress and economic freedom globally are positive signs. Both indexes correlate with greater productivity, higher incomes, less poverty, and better quality-of-life metrics such as longevity, literacy, and happiness. 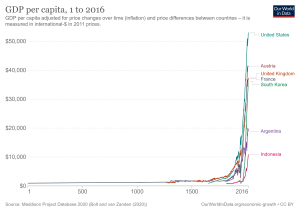 Another basis for optimism can be found from the perspective of long-term economic growth. Due to modern growth, people’s real incomes (real meaning adjusted for prices) have increased from $3-6 per day in 1800 to $130 per day in the United States and $33 on average globally — a three thousand percent increase. This trend is captured by the nearby chart, showing the hockey-stick growth of real GDP per capita in the past three centuries. This growth has made an enormous impact on the way people live, and toil. In 1895, for the average wage earner to afford just the six-volume set of Horatio Alger would take 21 hours of work, but by the year 2000, it would take just 0.6 hours (a productivity multiple of 35!). With this enormous growth have come many improvements, including poverty reduction, quality-of-life betterment, ecological growth, social justice, and more. Not everything is better, and there remain serious social problems. Yet overall, a growing economy per capita means rising living standards. Economists have taught this hopeful lesson since at least the time of Malthus. 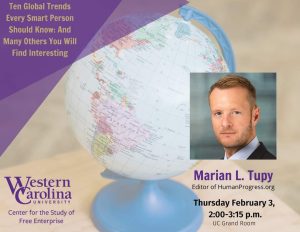 At CSFE, our mission is to support cross-disciplinary inquiry on the role of free enterprise in a flourishing society. That pretty much puts us in the optimist camp. This is why we have held events that include an evening with Apollo 16 moonwalker Charlie Duke and conversations with author Celeste Headlee on the benefits of difficult conversations, and Home Depot co-founder Ken Langone on the limitless potential of WCU students. This also explains why we publish research reports on long-term economic growth right alongside reports on post-traumatic social growth, and why we are focusing our energies this year on our human progress research initiative. And finally, this is why we are pleased to bring author and editor of HumanProgress.org, Marian Tupy, to Cullowhee this week for a campus talk.

Mr. Tupy’s talk is based on his recent co-authored book, Ten Global Trends Every Smart Person Should Know: And Many Others You Will Find Interesting. Using publicly available data, the authors show trends of betterment across a range of issues from health to violence, work, ecology, agriculture, technology, and more. By offering Marian’s evidence-based perspective to the campus community, as with all our work, we at CSFE hope to provide solid bases for prioritizing common problems, identifying workable ideas, and inviting the community into reasoned discussion and next steps. Pandemic or not, we should not lose sight of the many ways in which things are getting better. Maybe now is not such a bad time to be optimistic, after all.

*Many thanks for research assistance on this post go to Libby Weitkamp, a sophomore Entrepreneurship major and 21-22 CSFE Student Affiliate. Libby is a member of the Honors College board, and as a Student Affiliate, she is working on a survey design to elicit peoples’ attitudes regarding economic development and growth, part of CSFE’s Human Progress Research Initiative.