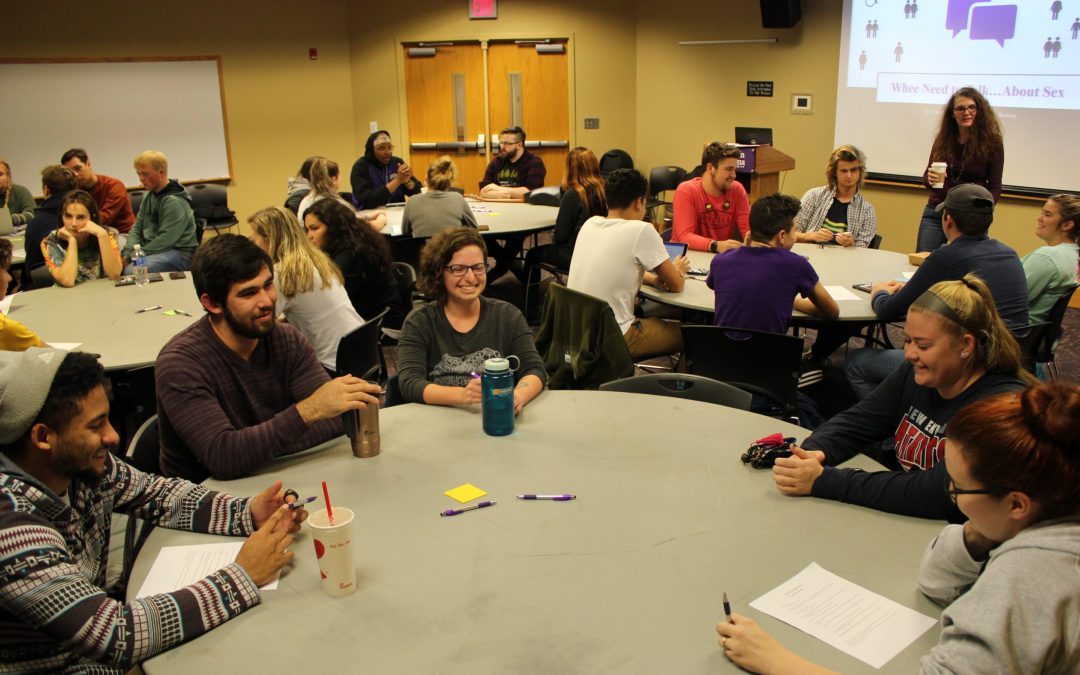 Dr. Candy Noltensmeyer and Shelby Broberg, along with a class of students taking a communication course on sex and sexuality, worked with over 60 students on how to talk about giving and receiving sexual consent. The workshop was held on Nov. 5, 2019.

The workshop was the first of two organized by the Communication Department connected to WCU’s One Book committee and inspired by the book,“We Need to Talk” by Celeste Headlee.

It began with students, mostly freshman, sitting at roundtables engaging in small group discussions led by peers. At each table sat two peer-leaders, each peer was provided a discussion guide containing questions that touched on the key themes and social beliefs about consent. Noltensmeyer and Broberg also helped further the small-group discussions by engaging in conversations and answering questions among the small groups as well as the group as a whole.

After small group discussion covering themes of sexual consent, such as, what it is, when it is needed, and if it can be revoked, and some generational myths like, ‘who’s responsibility is it to ask for sex’ and ‘if asking for consent will ruin the mood’, the room convened for an overall review of the small-group discussion.

“We focused on consent because it comes at a very beginning of a relationship and it is a good place to start a conversation. It is a first step of building a sexual relationship,“ said Noltensmeyer.

The discussion began with defining consent. One student said, “An affirmative, enthusiastic yes,” as to which the room agreed. Broberg then asked attendees what an enthusiastic yes sounded/looked like and how someone who is not 100% in their consent, might sound/act differently? Students discussed how to look for verbal and non-verbal cues. From the discussion, attendees agreed that sexual consent should be spoken, is always (dependent on conversation) needed with each progressing step, can be revoked, cannot be given while under the influence and is out of enthusiasm rather than coercion.

Later, students worked with their tables to come up with acronyms to help remember some of the key themes they agreed upon during the discussion about consent. After working and allowing time for a brief snack break, each table shared their acronym with the overall group. One group decided to use the word CONSENT – clearly stated, obvious, necessary, serious, equal, needed and transparent. Another used the word SWEET – sober, willing, educated, engaged and timely. 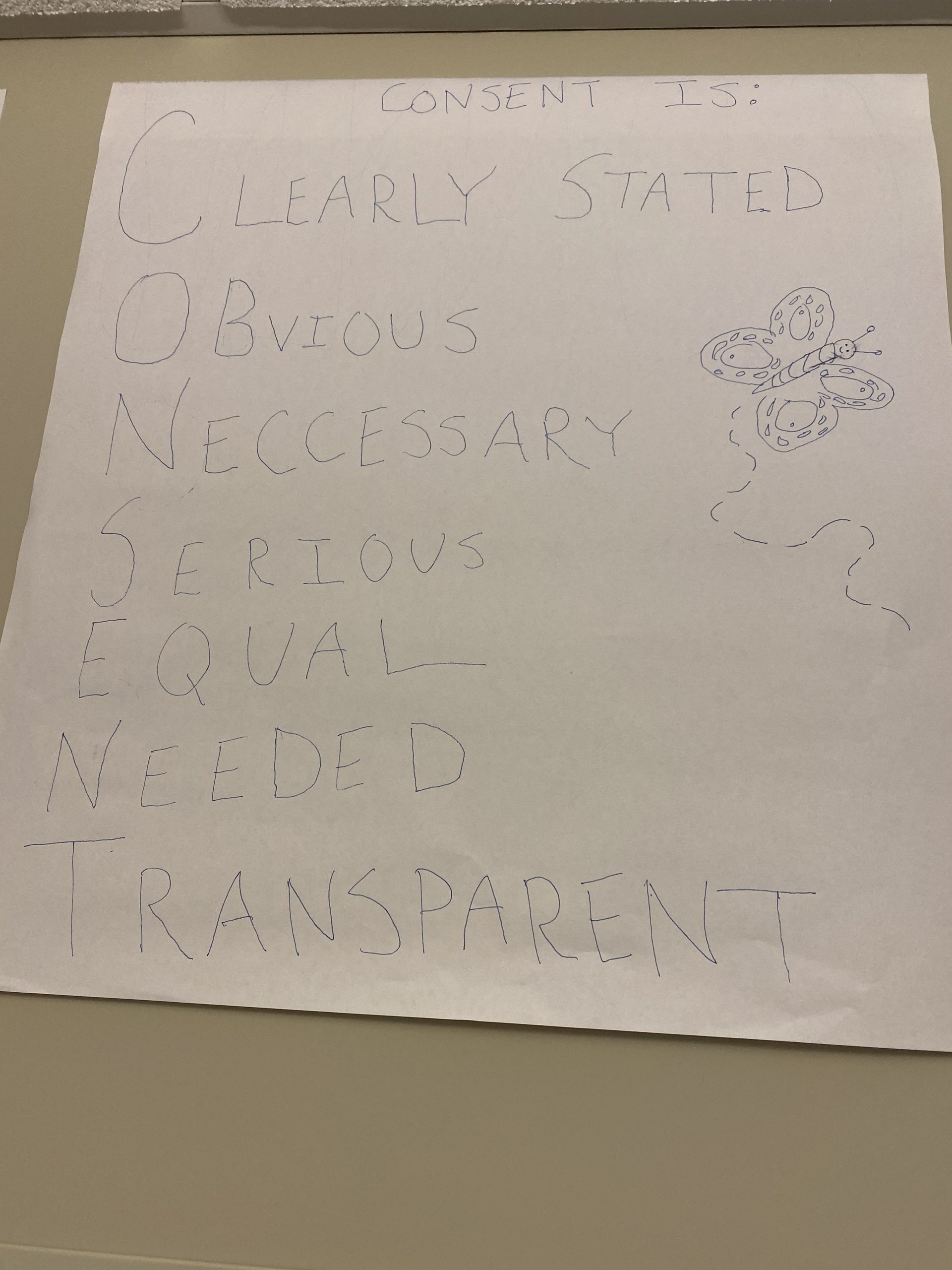 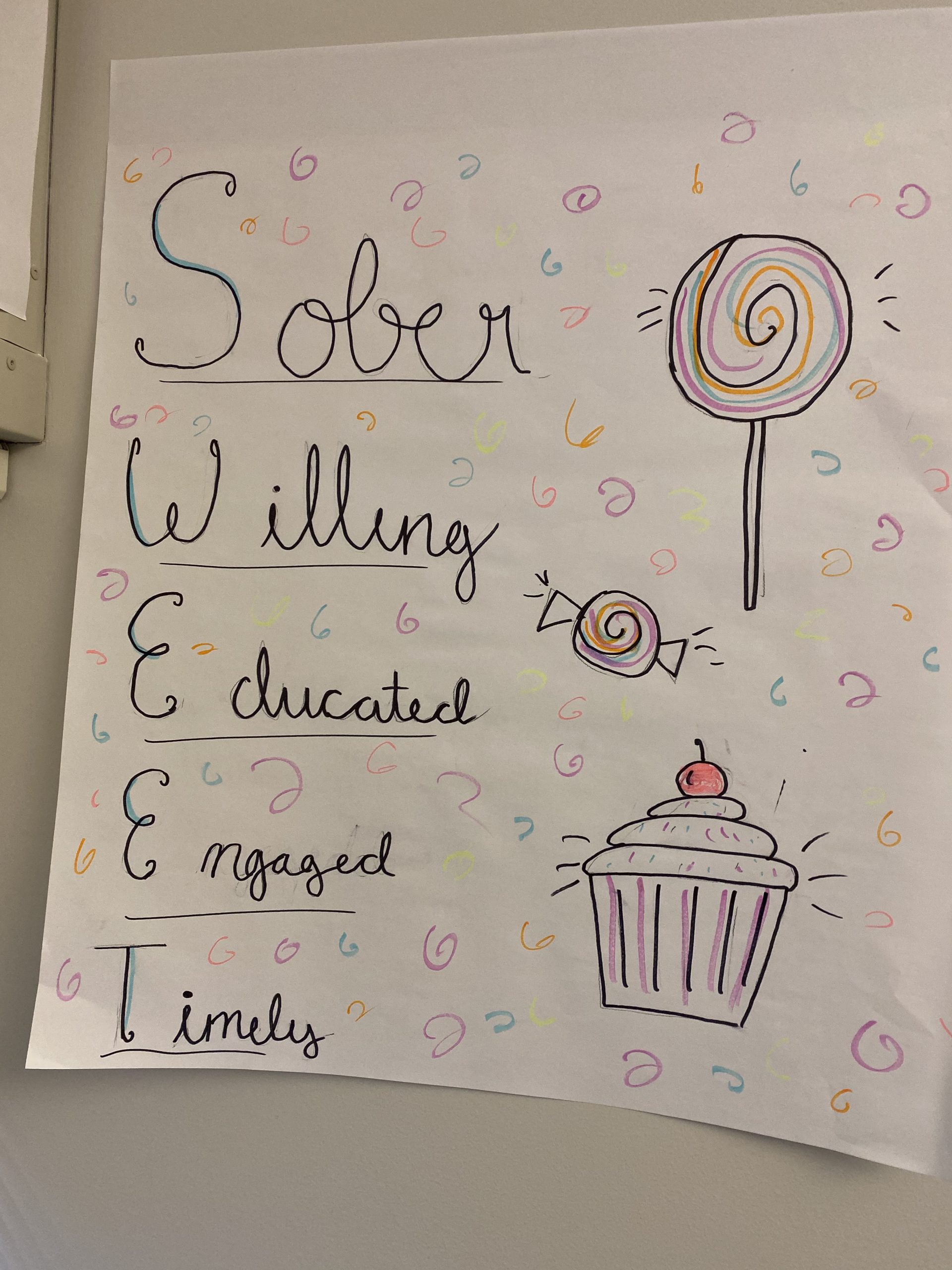 “At the start of the workshop most of the students were not willing to open up and by the end of the second hour they were all talking which was wonderful,” said Noltensmeyer.

Before ending the workshop, hosts asked attendees to look at the sexual scripts, beliefs about sexual interactions constructed by the culture that reflect how one may or may not communicate about consent. Such as the myth of the gatekeeper, the belief that one party is responsible for asking for consent and the other is responsible for giving/denying consent. Students agreed it is all participating parties’ responsibility to ask and give consent.

Keeping with Headlee’s overall theme to discuss uncomfortable but necessary conversations. This workshop left students with a lot to consider.

Glenda Hensley, Director of first-year undergraduate studies, and the chair of the One book committee was happy with the attendance but more so on the topic and what the students’ learned.

“Conversation and effective communication are critical as we contemplate any significant topic, from those that are global, such as this year’s campus theme “Sustainability and the Environment,” to topics around diversity, empathy, and relationships. As a High Impact Practice, ‘Common Intellectual Experiences’ provide us the space and time to examine and reflect and to have conversations that matter about topics that very much matter, such as consent and respect,” Hensley wrote in an email message.

As far as improvements go, the students agreed that they would like more access to sexual communication that will be as informative and inclusive as the workshop was.