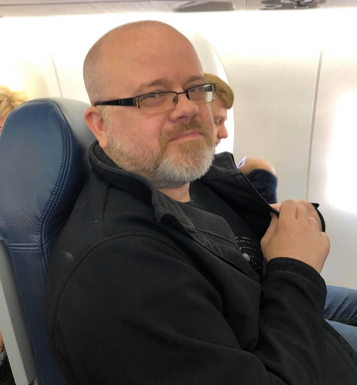 Regulations from COVID-19 have required much of the world to begin working at home, but for alumnus, Mike Crisp, not much has changed in that department. For the past 13 years, Crisp has owned a public relations firm, managing it out of his home office.

Crisp graduated Western Carolina University in 1999 and has made his way around the country following various job opportunities throughout the years. Crisp, a Navy Veteran, realized his love for writing and found his calling in print media during his time at WCU.

Following his undergraduate internship with the Public Relations Department at Southwestern Community College, Crisp moved north to work as an account executive for a public relations firm near Manhattan in New York City. Soon after, Crisp moved back to the South, where he briefly worked for an advertising firm based in Greenville, South Carolina before making his way to Atlanta.

Leaving Atlanta in 2007, Crisp knew it was time to go home to Marion, North Carolina. In Marion, a colleague reached out to Crisp about a public relations position with Dow Chemical Company. Soon after, he expanded his practice and established his own firm: Crisp Public Relations.

Crisp oversees his PR practice and works with five other companies outside his firm. These partners include a graphic designer, web designer, tradeshow display builder, a printer and a web server company.  Crisp’s daily work involves overseeing the production of client materials among his business partners as well as conference calls, client webinar training, client counsel, media pitching, webinar promotion, and writing news releases and articles.

Crisp has worked with an extensive list of high profile business partners in the technology and telecommunications industries, including Dow Chemical Company, Michelin Earthmover & Industrial Tires, Arkema Coating Resins, DaimlerChrysler Commercial Vehicles, Alemite Fluid Management and many others. He has also had hundreds of articles, technical papers and other materials featured in trade publications as well as The New York Times and Time Magazine.

Crisp holds Western in very high regard. He believes it is one of the best schools in the country. He remembers his time at WCU with fondness and gratitude for the opportunities he was presented in his courses, internship and extracurricular involvement.

Crisp was primarily a print media student but also took many classes the public relations concentration. Crisp got involved with the Public Relations Student Society of America and was their first web designer for the national association.

Crisp’s greatest advice to students in the communication field is to develop a portfolio, “Work samples are everything,” said Crisp. Crisp’s involvement at WCU gave him a well-developed portfolio, allowing for his early success in the public relations field.

In his own firm, he has hired many people right out of college and many people who are already experienced in the industry. He, like many other employers, looks at the initiative taken to develop materials outside of classwork. He looks for individuals who wrote articles for local news outlets or created materials to be used by community organizations.

Connect with Mike Crisp on LinkedIn.