Dr. Jim Manning retires from WCU after more than two decades of service 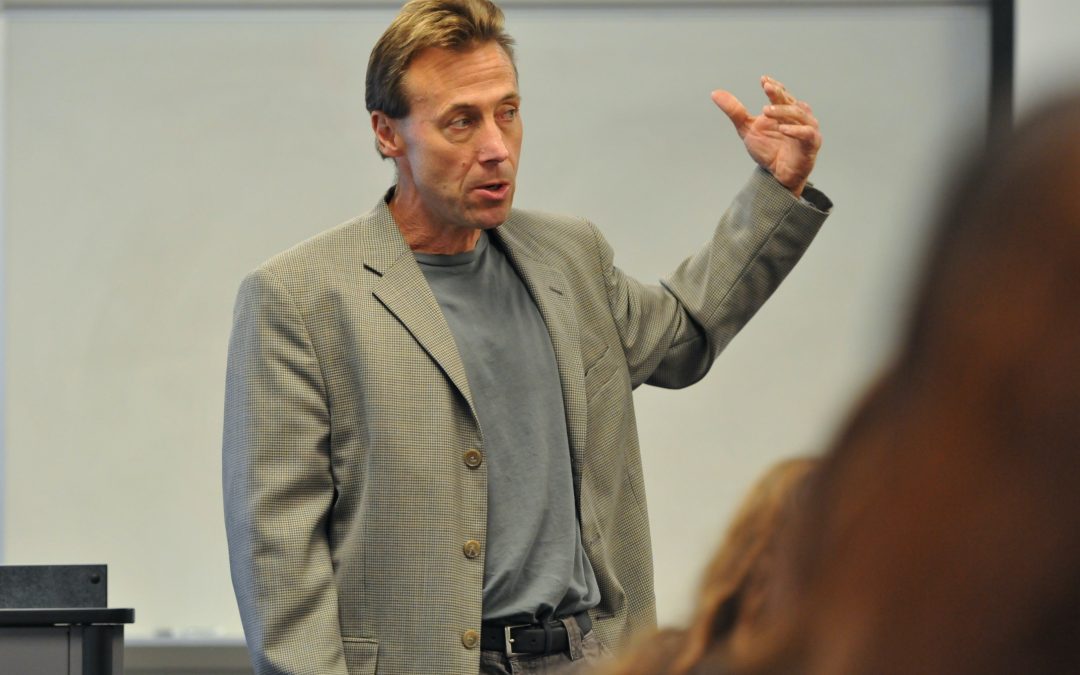 Coming up on his 26th year at WCU, Dr. Jim Manning, associate professor of communication, has announced he will be retiring after the end of finals week, May 14, 2021.

Manning joined the then Communication & Theatre Arts Department in 1993 as the technical director for the theatre program. Manning has significant experience working with professional theatre companies, such as the Playhouse on the Square in Memphis and Off-Broadway theatres in New York.

In 1995, he enrolled in the Ph.D. program in drama and rhetoric at the University of Georgia. His dissertation focused on how Appalachia and its people are presented in plays and popular culture.

After completing the Ph.D. program at UGA, he returned to WCU in 1997 on a tenure-track position, teaching both theatre and communication classes. In the early 2000s, he also served in director, technical directing and acting roles with the Western Carolina Stage Company, a professional actor’s equity summer theatre company

One of the highlights of the Western Carolina Stage Company was the acceptance of an original musical, “Mother Divine,” co-written by then communication faculty member Dr. Laurel Vartebedian, to the New York City Fringe Festival.

It was the perfect opportunity for Manning, a native of New York who was intimately familiar with New York theatre. “We needed someone who spoke ‘New Yorker’ in order to navigate our trip into Greenwich Village both figuratively and literally,” Vartabedian said. “Because he was linguistically fluent with just the right residual accent and knew the necessary routes— (and adjectives), we survived a couple of weeks and a major power outage.  For that, I’ll always be grateful.”

Dr. Robert Vartebedian, then dean of the College of Arts Sciences, has fond memories of working with Manning. “Working directly and indirectly with Jim was always an absolute pleasure. Among Jim’s many attributes was the fact that he was an honest and direct person. One extremely important hire that I needed to make within my last two years at Western Carolina University involved someone who Jim knew well. I knew if Jim vouched for him, that would be good enough for me. He did, and it turned out to be one of the best hires I made in my 40-year career,” he said.

Even as WCU and the programs within it began to change, Manning’s passion for teaching never faded away.

“Dr. Manning just stands out so much in my memory because he was just so enthusiastic about the courses he taught,” former student Julia Duvall said. “He was always so fun in class and just has a great attitude. He made the material fun. I always looked forward to going to his class.”

During the COVID-19 era, Manning worked to create the best experience he could for his students by preparing them for working in the midst of a global pandemic.

“Especially with Zoom, he prepared me for what my 2020 and 2021 year was going to be like in my role as a community coordinator for residential living because I had no idea what Zoom was, and he prepared me to have these moments where I am the only one speaking on a virtual platform,” former student Dane Wagner said. “Now I’m taking control of lessons and meetings, and he definitely prepared me for that.”

In addition to his work on the stage and in the classroom, Manning has dedicated a significant portion of his life to community service internationally, regionally and locally. After completing his undergraduate degree at Carroll College in Montana, Manning served in the Peace Corps in Gabon, Africa, where he helped build schoolhouses for children. For the last decade, he has worked with the Cullowhee United Methodist Church on a variety of service projects, including summer mission trips to repair homes damaged by natural disasters.

While Manning’s retirement will have an impact on all Communication faculty, one faculty member will likely feel the impact more than anyone else, Manning’s wife, Dr. Betty Farmer, who also teaches in the COMM Dept.

“After 28 years, I can still say he’s such a great man,” Farmer said. “He’s so smart and hard-working. He cares so much about students and wants students to succeed. It’s going to be bittersweet for him. He’s going to miss not being in the classroom. Western has just been so much a part of our lives, but I’m excited for the opportunity this presents.”

Even though his presence will no longer be felt throughout the Stillwell Building, his memories with fellow faculty, staff and students will live on forever.