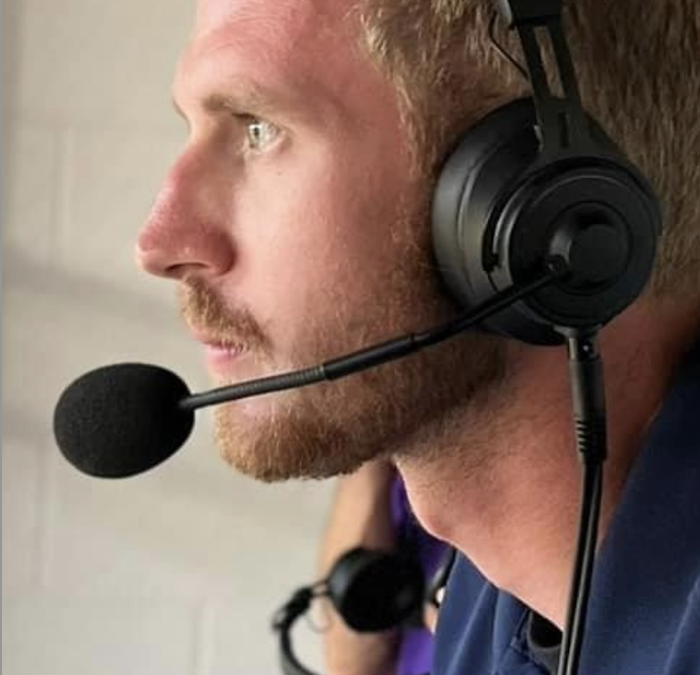 Caleb Peek, a Western Carolina University alumnus, came to campus on Oct. 24 to speak to Professional Development and Senior Seminar classes about his professional journey and offer advice to the students.

Peek graduated in May of 2017 with a double major in journalism and broadcasting.

“Working in communications, specifically broadcasting, is something I knew I wanted to do from an early age. I recognized that certain moments in history, whether news, sports, or entertainment, have been defined by the way they were covered – and I wanted to have my chance to be a part of history,” said Peek.

While in school, Peek had an internship in Marshall, N.C., at a local paper he grew up reading.

Peek noted that this internship took much dedication as he would drive there from his residence in Cullowhee on Mondays, work, and drive back before his 4 p.m. class.

“Internships matter and will be beneficial. It was especially eye opening to me, going from covering a sheltered area like WCU’s campus to writing for a publication that people pay for,” said Peek.

After Peek graduated, he felt prepared for a job in the field; in fact, he mentioned how much he learned from Professor Don Connelly, which he claimed to be a master in his teaching area.

However, Peek was unsure exactly what he wanted to do and began working at Ingles Markets. From Ingles, he landed a job at a live radio station in Canton, N.C., through a mutual connection.

There, Peek learned that radio is not just about his voice but the importance of knowing what he talks about. From doing a 6 a.m. show, he also learned how to be prepared and develop patience.

After his time in Canton, Peek accepted a position at iHeartRadio Asheville. As iHeart Radio is 860 stations across the nation, it was quite a change from being at the smaller station in Canton.

Peek worked at iHeartRadio Asheville for three years and gained great experience. It was there that Peek noted he had the best experience of his career when they put him on 99.9 FM Kiss Country.

“I was on the station I grew up listening to,” said Peek.

When on air, he felt as though he could not breathe for a moment, but after the first break, it felt natural.

Another monumental professional memory for Peek was in Nov. of 2016. Peek was going to Graham County, N.C. as a reporter for the Associated Press to report election results.

Getting there was like a “disaster movie with a fire burning on both sides of the road,” said Peek.

According to Peak, when it comes to the recording of history, “if you care, you will go do it.”

Recently, Peek decided to take a new anchor position in Harrisonburg, Va. For this position, he will be doing live radio every 30 minutes. He will cover high school sports and other smaller schools in the area.

From there, he hopes to possibly do some sports radio work for James Madison University, near where he is taking the new job. Sports have always been one of Peek’s passions.

Originally from Marshall, “this is a big move for me at age 28; it is my first time living out of western North Carolina,” said Peek.

When it comes to advice, Peek advised students to remember to “accept criticism, persevere, and remember that some things are out of your control.”

Peek even suggested that students consider joining Sportscasters Talent Agency of America if they are interested in sports broadcasting. According to Peek, members will be sent job offers and be able to have their resume reviewed.

And when it comes to finding a job, Peek advised students that it is most of all “important to reach out and then pursue,” stated Peek.