Someone currently enrolled at Western Carolina University will go on to have a significant career in the leadership of a major American company, predicts one of the country’s leading businessmen.

“Mark my word,” said Ken Langone, co-founder of Home Depot, during a WCU Distinguished Lecture Series event Monday, Oct. 22. “I have no doubt about it. Kids come here, wanting a better life. They’re willing to sacrifice and willing to make the effort. And I’m passionate about this kind of an environment, and that’s what I came for.”

An 83-year-old billionaire financier, investor and former day laborer, he is the author of “I Love Capitalism: An American Story,” a book the Wall Street Journal described as part memoir and part free-market manifesto. Free copies of the autobiography were given out to the first 150 who registered to attend.

The event was billed as a “fireside chat” and moderated by Edward Lopez, WCU professor of economics and BB&T Distinguished Professor of Capitalism. The A.K. Hinds University Center Grandroom held a packed house for Langone’s remarks, with approximately half of the audience being WCU students. Throughout the event, his words were met with nods of agreement and laughter at humorous insights, and they ended with a standing ovation. 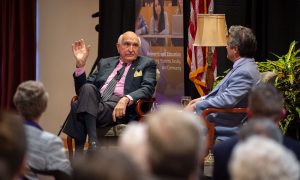 Langone was born in Roslyn Heights, New York, to an Italian-American working class family, his father “a great plumber but not a very good businessman” and his mother a school cafeteria worker. His grandfather immigrated and then worked for two years to save money to buy passage for his wife and two children. “My story could only have happened because I was born in America,” he said. “So, thank you grandma and grandpa, for coming to America. There is no other place like this on earth and we are blessed to be here.”

Langone attended Bucknell University and the New York University Stern School of Business before beginning a career on Wall Street in the 1960s. In 1974, he started his own investment firm and in 1979 helped launch Home Depot. By 1989, Home Depot was the nation’s largest home improvement store and today has more than 400,000 employees.

“People don’t work for us, they work with us,” he said. “When they come to work at Home Depot, they are associates. On day one, they become stockholders. We share success, with them and our customers. We tell associates, ‘never sell more than what customers want or more than what they need. Serve your customer. Build trust and we’ll be rewarded.’”

Langone shared his not-so-secret tips for professional success with students, with key elements being determination, integrity and dedication. “Work like hell, give it your best shot, but make sure you’re going someplace that you love going to everyday, and you love what you’re doing, and you can’t wait to get there. And if the boss said you’ve got to pay him to go there, and you could afford it, you’d pay him to go there. Because that means you really love it, and you’re going to be successful,” he said.

Langone told the audience that in capitalism not everyone wins, but what it holds is the chance to succeed and opportunities to try, and sometimes, try again.

“There will be mistakes,” he said. “Don’t let them be mistakes of character, integrity or values. First thing, you walk away from something you know is wrong. If it is not beneficial to your self-interest, if someone cannot count on you to do the right thing, it won’t work. Any other mistake you will recover from. I’ve made mistakes. If you have six months, I’ll tell you about them.”

Langone spoke about philanthropy as an important part of his philosophy of capitalism. Along with his wife of 62 years, Elaine, the couple has given millions of dollars to various charities, including universities, medical research and children’s causes. “It’s not my right to tell anyone what to do with their time or money,” he said. “Think of all the hospitals, museums, schools and athletic facilities, gyms you see. How did that happen? By people who can, giving.  Elaine and I have a strong sense of obligation to give back.

“But there are many ways to express your gratitude. It doesn’t have to be money,” he said. “Fortunately, I can write a check, as well as give time. Charity and philanthropy take many forms. You can donate your time. Go to a hospital, read to a child, be there for someone in need, clean up a park. There are things you can do and expect nothing back in return for them.”

The Distinguished Lecture Series is new this academic year and designed to engage the campus and community in dialogue on national issues, with perspectives from leading figures in education, arts and music, politics, business and economics. The series is co-sponsored by WCU’s Division of Academic Affairs and Center for the Study of Free Enterprise. The intent is to give students, faculty, staff and community members direct access to contemporary voices that are shaping the nation.