From the Moon to Cullowhee 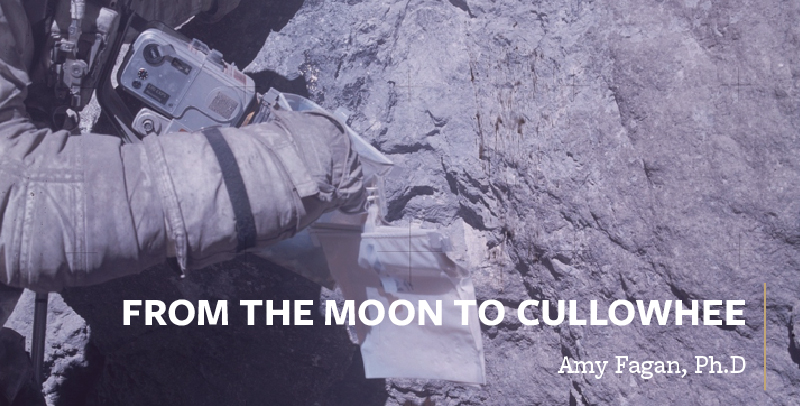 Think of the last book you read. Was there a dedication? Most likely it was to the author’s mother, spouse, child, friend, mentor, or colleague. At the very least it is very likely that the book was dedicated to someone known to the author personally, right? The same thing goes for dissertations, with many being dedicated to parents. Mine, however, was different. My 6-year-in-the-making tome was dedicated to three men that I have never met, but without whom my research would have been impossible. Those men are John Young, Ken Mattingly, and Charles “Charlie” Duke Jr.—the Apollo 16 astronauts who returned 211lbs of rocks from the lunar surface in 1972, just shy of 11 years after President John F Kennedy challenged the US to send an American to the Moon and return him safely before the end of the 1960’s.

This was an amazing accomplishment and remains one of the most incredible feathers in the American hat. 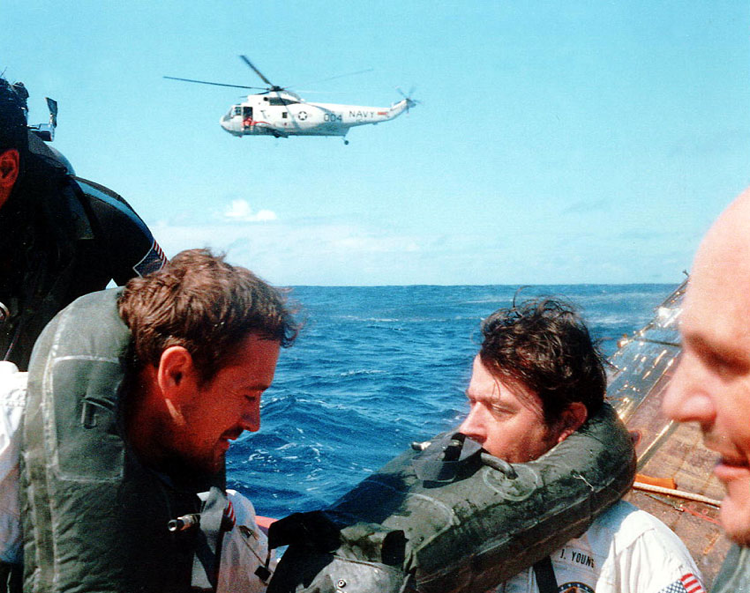 (L-R) Charlie Duke, John Young, and Ken Mattingly in the recovery raft after splashdown back on Earth at the end of the Apollo 16 mission (NASA image S72-3950).

Twelve in All of Civilization

Apollo 11 landed on the Moon in 1969 and was followed by 5 more successful manned landings between 1969 and 1972 before the Apollo program was cancelled due to funding. Three men were on each mission, but only 2 walked on the surface while one stayed in the orbiting spacecraft (in the case of Apollo 16, this was Ken Mattingly). That means that in the entire history of humanity, only 12 people have set foot on another planetary surface. Twelve people in thousands of years of human history! And one of them is coming to our little slice of heaven in Cullowhee, NC—Apollo 16 Lunar Module Pilot and the 10th man on the Moon, Charlie Duke. 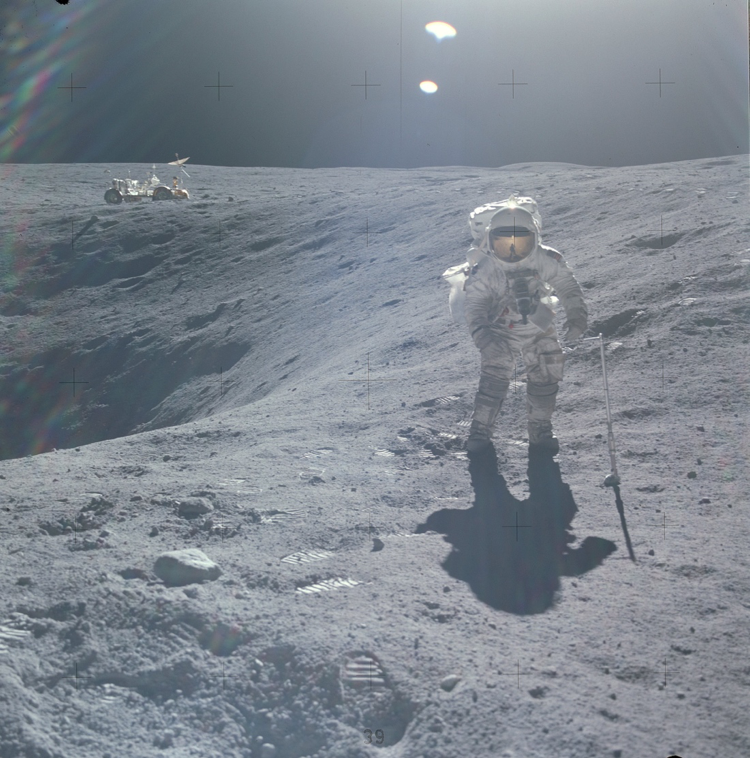 Charlie Duke on the surface of the Moon at station 1 during the first extra vehicular activity (EVA). Duke is standing next to Plum Crater (131 ft wide, 33 ft deep) with the lunar roving vehicle behind him (NASA image AS16-114-18423HR).

We’ve Only Scratched the Surface. Literally.

Although we have sent humans to the Moon several times, we have hardly begun to explore it. All of the Apollo missions landed on the nearside of the Moon (i.e., the side that is always facing Earth due to tidal forces) relatively close to the equator.

Prior to the Apollo program, the NASA robotic Surveyor missions landed in similar locations on the nearside—Apollo 12 astronauts landed so close to Surveyor 3 that they walked over, took a piece of the lander, and returned it to Earth to study the effects of space weathering and micro-meteorite impacts. The Soviets also sent robotic landers (and rovers) to the Moon with Luna and Lunokhod, respectively, and had several successful sample return missions (1970-1976) using these instruments; these also landed on the nearside, but a little farther spread than the US missions. Fast forward to 2013 and the Chinese became the third nation to touch down on the lunar surface with a robotic lander. Want to guess where it landed? Yep. The nearside.

Why so many to the nearside? Communication. Because the Moon is tidally locked with Earth such that one side is perpetually facing us, we cannot see the farside (NOT the “darkside”) of the Moon from Earth, which makes communicating with humans or a spacecraft difficult. It wasn’t until December 2018 that a lander was successfully sent to the lunar farside by the Chinese—a tremendous feat to explore an area no lander or human had visited before (although we do have high-resolution imagery).

Even if we look at just the Apollo 16 mission, where Duke and Young drove a rover approximately 7 miles, they still did not cover much of the lunar surface. For comparison, take a look at the image below of Cullowhee overlaid by the paths taken by the Apollo 16 astronauts (this image is at the same scale!). 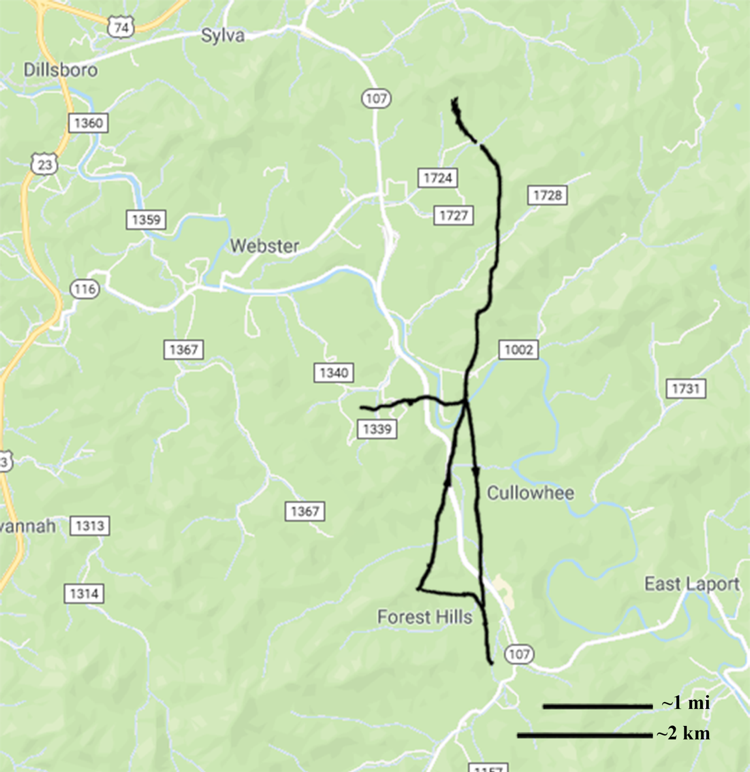 Apollo 16 traverse (to scale) overlaying a Google Maps basemap of the Cullowhee, Sylva, Dillsboro area showing the extent of exploration of Duke and Mattingly on the surface of the Moon.

Imagine that you are an alien species visiting Earth and this is your species’ 5th landing, but first time to land in this location. Follow that path and let me know what you learned about Cullowhee, WCU, North Carolina, the USA, or Earth It might just be easier to ask it the other way…what did you miss? Deserts, glaciers, volcanoes, oceans, lions, tigers, bears (oh my! Actually you might see a bear). The point is that even with 6 manned missions to the Moon, we have not explored much of the surface and therefore the rocks that have been returned are not entirely representative of the Moon.

Big deal…the Moon is all just a grey rock anyways, right? Wrong! We know that there are many different types of rocks on the Moon composed of the same minerals that we have here on Earth. (That is not surprising when you learn that the Moon coalesced from impact debris of a Mars-sized object hitting Earth over 4 billion years ago.) When you look up at the night sky, you will see light grey (the highlands where Apollo 16 landed) composed of a rock called anorthosite and black composed of a volcanic rock called basalt. These dominate the surface, but there are certainly more types, each that give geologists more information of how the Moon formed, cooled, and evolved over the past 4.5 billion years. In fact, the materials on the lunar surface are not all grey or black either—Apollo missions returned glass beads that were green and orange and formed from processes associated with large asteroid impact events and volcanic eruptions, respectively. We know all of this (and more) because the Apollo missions brought back samples.

Despite humans barely scratching the surface of the Moon, geologists have made many discoveries about the Moon that have completely changed our understanding of the Moon’s origin, the presence of water in and on the Moon, and the timing and composition of asteroids hitting the Moon (and Earth) over billions of years. The Apollo astronauts returned rocks that geologists (myself included) continue to study with better instrumentation that give us higher resolution information each year. These rocks keep providing clues to questions we didn’t even know we should have back in the 1960s. 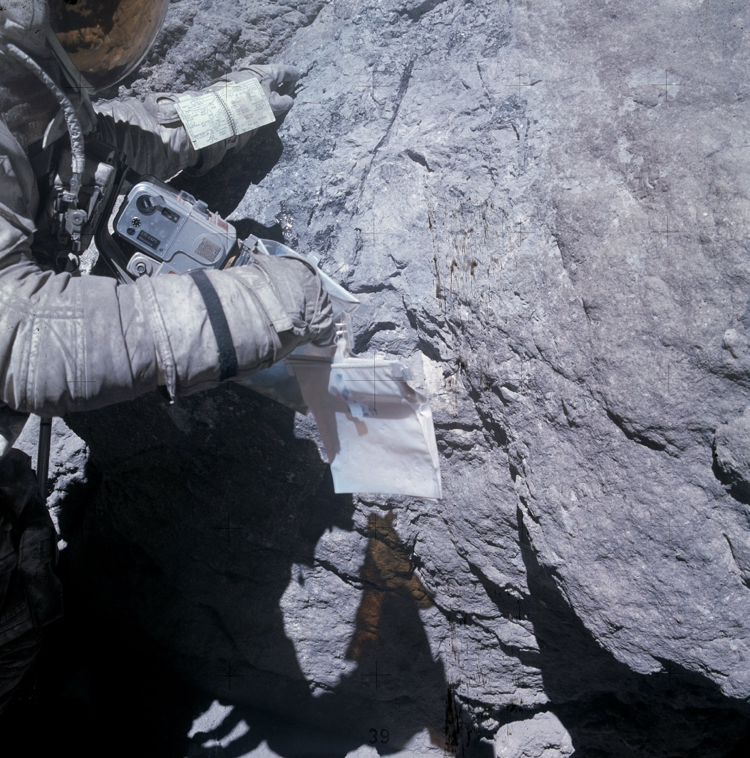 This is why it is spectacular to have Charlie Duke, one of only 12 men to have walked on the Moon, visit WCU. The samples returned by the Apollo missions are the gift that keeps on giving to science and humanity. The astronauts risked everything to reach another planetary surface, and for millennia to come we will treasure these samples as they continue to open our eyes and minds to the secrets of the solar system. Thank you to those men for the greatest gift.

Dr. Amy L. Fagan is the Operations Chair of the Lunar Exploration Analysis Group, an Assistant Professor in Geosciences and Natural Resources at Western Carolina University with an expertise in lunar geology, and a complete Lunatic.