Speaker Event: Why Do People Die by Suicide? 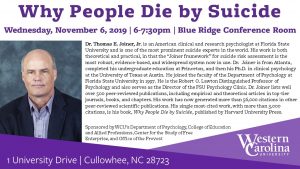 Part of our mission here at the Center is to support work that helps better understand the determinants of human flourishing. This is why we held our recent awareness campaign and town hall on the opioid & addiction crises, and why we are expanding our efforts in these areas. This is also why we are pleased to be one of the co-sponsors an upcoming campus talk about suicide, featuring Dr. Thomas E. Joiner, Distinguished Professor of Psychology at Florida State University and one of the world’s leading experts on suicide. Our own Dr. David McCord, WCU Professor of Psychology and member of the Center’s Advisory Board, is the force behind this event. We sat down with David and asked for his thoughts on this important event.

Q1: Why is it important for WCU to address the topic of suicide?

David: Suicide is a leading cause of death, with over 1,000,000 cases annually worldwide. It is inextricably linked to other pernicious socio-cultural phenomena including opioid and other addictions, availability of guns, and violence in media and life. As WCU graduates are being prepared for citizenship in an array of important domains, including healthcare, education, and public policy, it is essential that they have the most current scientific perspectives on this devastating issue.

Q2: Our guest speaker is Dr. Thomas Joiner, a renowned psychologist and leading expert on suicide. Can you tell us a little about him?

David: Dr. Thomas E. Joiner is by most indicators the world’s leading suicidologist. He completed his undergraduate degree at Princeton and his Ph.D.in clinical psychology at the University of Texas at Austin. He joined the faculty of Florida State University in 1997, by which time he had already gained prominence in suicide research. He is the primary author of the Interpersonal Theory of Suicide, the leading scientific perspective on this issue. His risk-assessment framework is very widely used. He has published widely on methods of intervention and case management. In all of these areas Dr. Joiner’s work has redefined the state of knowledge and added important discoveries. He lists more than 540 scientific publications, including journal articles, chapters, and books. His most cited publication is his book, Why People Die by Suicide, Harvard University Press, with more than 3,000 citations. His research at Florida State is currently supported by more than 70 million dollars in external grant funding.

Q3: What are the main issues that Dr. Joiner will address in his talk?

David: Dr. Joiner is very comfortable talking to top-tier scientific groups, and equally comfortable talking to general audiences. He will explain in clear language the main components of the Interpersonal Theory of Suicide. Much of his research has been on risk assessment, and he will certainly discuss myths about suicide as well as genuine warning signs. He will provide some ideas as to how we as friends, family, neighbors, and co-workers can be helpful to someone experiencing suicidal thoughts or urges, and he is likely to have some thoughts about public policy issues as well.

Q4: Suicide is a difficult subject to talk about. Through Dr. Joiner’s research and his talk here on November 6, how does he provide a measure of hope?

David: This is an interesting question. Dr. Joiner is not into doom-and-gloom scenarios. In contrast, he has gained through scientific research a much better understanding of suicidality than we had previously. Much of his energy has been devoted to developing more accurate screening and assessment techniques, and, most importantly, intervention approaches that actually work. The audience should leave this presentation with a much better grasp of the disturbing and difficult issue of suicide, and they should be able to talk about it with others more comfortably and openly. They should be able to recognize signs earlier, be more willing to face them squarely, and to respond more appropriately and helpfully to others in need.