Why are recoveries increasing in the Sunbelt, especially in North Carolina? 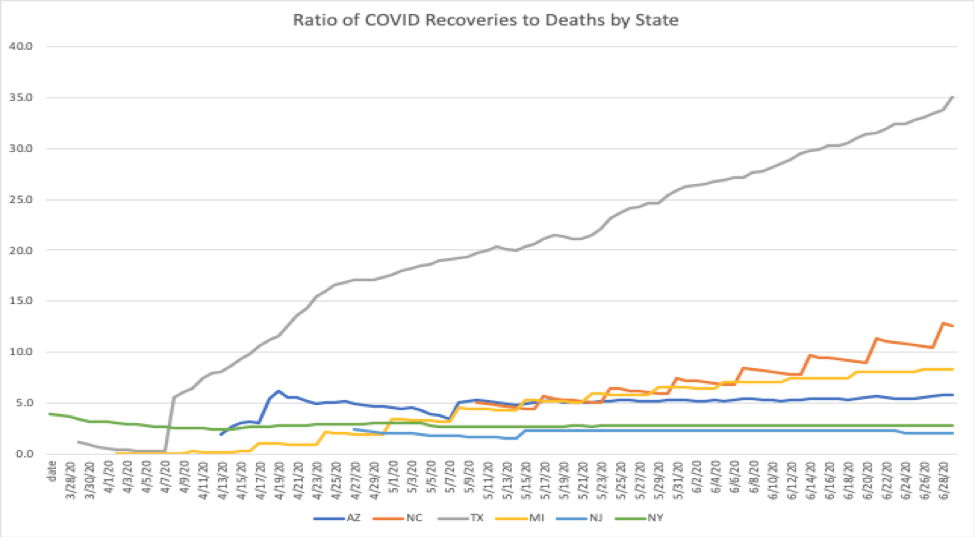 In a new study as part of CSFE’s COVID-19 research initiative, with co-authors Stephen Miller and Craig Richardson, we find that surging cases in Sunbelt states are not leading to surging hospitalizations or deaths. If anything, the growth rate of deaths is declining.

One possible reason can be detected in reported recoveries. All but three of our study’s 10 comparison states provide data on recoveries. And while reporting criteria do vary by state, comparing the ratios of recoveries to deaths can still shed some light on why this round might be different. In some states, a recovery is counted as a hospital discharge. Other states count an infected person as recovered if they are symptom-free for a period of time or have two consecutive negative tests. Texas clearly measures recoveries differently, where an infected person is “recovered” 32 days after hospitalization if the patient survived or 14 days after being recorded as a case if hospitalization was not required. In this sense, recoveries are a conservative metric because many survivors are not tracked or recorded, which could artificially inflate the presumed number of active cases. Figure 5 from the new study is reproduced here; it reports the ratio of recoveries to deaths for six of our comparison states starting in late March through late June.

As Figure 5 shows, the ratio of recoveries to deaths portrays an improving trend in North Carolina. By the end of June, the state’s ratio of reported recoveries to reported deaths was 12.6, meaning that for every 100 hospitalizations an average of 7.4 cases would lead to deaths while the remaining 92.6 cases would become recoveries. The good news for North Carolina is, this ratio has been steadily increasing throughout the duration of available data, beginning about May 10.

Figure 5 also shows North Carolina in a relatively good position compared to all but one of the other states. New Jersey and New York flat-lined early on, and have shown no improvement in recoveries to deaths. Meanwhile, North Carolina is not only improving but by the end of June has more than five times the recovery rate as New York / New Jersey.

We want to stress that this is relatively good news. Every increase in cases warrants the utmost concern. But it is important to understand where progress is being made, and why. If we can better understand why hospitalizations and especially deaths are not following new cases in the same large numbers as they did earlier in the pandemic, perhaps we can do more in those directions, to improve the situation even more, and eventually to bring all these numbers down as close to zero as humanly possible.